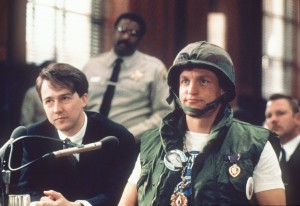 “Congress shall make no law…abridging the freedom of speech, or of the press.”â€”The First Amendment to the U.S. Constitution

Academy Award®-winning director Milos Forman’s “dream script,” written by Scott Alexander & Larry Karaszewski (ED WOOD), was about the multi-millionaire founder of Hustler magazine, who was married to a stripper who died of AIDS; was a born-again Christian suddenly shot down and paralyzed for life; and was a flamboyant, grade school dropout who tested the limits of America’s tolerance. It was also about Flynt’s fight for his First Amendment rights. In addition to Forman (ONE FLEW OVER THE CUCKOO’S NEST, AMADEUS), the script drew the attention of a major studio, Columbia Pictures, major producers Oliver Stone (PLATOON, JFK, ANY GIVEN SUNDAY), Janet Yang (THE JOY LUCK CLUB, ZERO EFFECT), and Michael Hausman (SILKWOOD, HOMICIDE); actors Woody Harrelson, Courtney Love, and Edward Norton. How and why these powerful and creative forces and talents came together to make this unlikely film are among the questions answered in this unique book in the Newmarket Shooting Script® Series format, which presents a facsimile of the shooting script; the original treatment that triggered Stone’s and Columbia’s involvement; the writers’ notes about the film’s evolution, its cuts and changes; movie stills and historical photos; cast and crew credits; and an exclusive interview with the Czech-born Forman on the film, American citizenship, and free speech.
Author: Scott Alexander and Larry Karazewskii Publisher: Newmarket Press ISBN: 978-1-55704-305-4 Format: Paperback Pages: 208 pages Product Dimensions: 23.1 x 17 x 2 cm