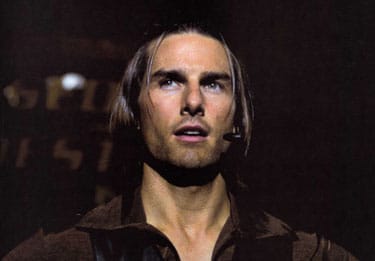 There are stories of coincidence and chance and intersections and strange things told. There is the story of a Father (Jason Robards), the Young Wife (Julianne Moore), his Lost Son (Tom Cruise), the Caretaker (Philip Seymour Hoffman), the Boy Genius (Jeremy Blackman), his Father (Michael Bowen), the Game Show Host (Philip Baker Hall), the Daughter (Melora Walters), the Mother (Melinda Dillon), the Ex-Boy Genius (William H. Macy), and the Police Officer in Love (John C. Reilly). This is a story set in the San Fernando Valley on a day full of rain with no clouds. This is a story about family relationships and bonds that have been broken and need to be mended in one day. Fulfilling the promise of both BOOGIE NIGHTS and HARD EIGHT, Paul Thomas Anderson has created a third movie that is equally compelling and elusive. MAGNOLIA can best be described as a story about family relationships and bonds that have been broken and must to be mended in one day. Rarely has any screenplay offered so much insight into the imagination of a filmmaker and how he translates his ideas into a cohesive film. Profound in nature, elegant in language, and rich in plot and character development, this lyrical script reads like a work of great fiction and will be admired by anyone interested in the art of the screenplay. In addition to the complete shooting script, the book includes an introduction by Paul Thomas Anderson, an extensive interview conducted by Chuck Stephens with the writer-director, a full-color photo section featuring more than 40 photos, and the complete cast and crew credits.
Author: Paul Thomas Anderson Publisher: Newmarket Press ISBN: 978-1557044068 Format: Paperback Pages: 212 pages Product Dimensions: 25.1 x 20.3 x 1.3 cm