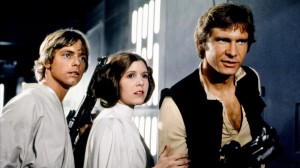 The most popular series of movies in the history of cinema, the STAR WARStrilogy altered forever our notion of what the movies could do.

RETURN OF THE JEDI is the trilogy’s concluding section. With its myriad peculiar creatures it seems, at first, to be a lighter film than the others. However, as its subtle narrative unfolds, it becomes apparent that the centre of the trilogy is not Luke Skywalker but Darth Vader, and it is his redemption that forms the culmination of this epic story. The power of this conclusion excites curiosity about how someone who began so idealistically could have turned to the dark side of the Force – the story of which is revealed in the next three instalments to the STAR WARS saga . . .