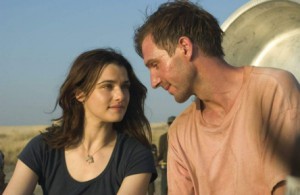 Exclusive to this Newmarket Shooting Script book are the film’s award-winning screenplay by Jeffrey Caine, a foreword by John le Carre written specially for this official edition, along with a perceptive introduction by film critic Kenneth Turan, a color photo section, and in-depth notes on the production of the film, featuring behind-the-scenes comments from the actors, the writers, Oscar-nominated director Fernando Meirelles (CITY OF GOD), and his international filmmaking team including observations about shooting in Kenya and the worldwide effects of the pharmaceutical industry. Two-time Academy Award nominee Ralph Fiennes and Rachel Weisz head the cast of the highly acclaimed thriller filmed on location in Berlin, London, and Nairobi and numerous other parts of Kenya.

In a remote area of northern Kenya, the region’s most dedicated activist, the brilliant and passionate Tessa Quayle (Rachel Weisz), has been found brutally murdered. Haunted by remorse and jarred by rumors of his wife’s infidelities, mild-mannered British diplomat and Tessa’s widower, Justin Quayle (Ralph Fiennes), surprises himself by plunging headlong into a dangerous odyssey. His eyes are soon opened to a vast conspiracy at once deadly and commonplace, one that has claimed innocent lives- and is about to put his own at risk.
Author: Jeffrey Caine Publisher: Newmarket Press ISBN: 978-1-55704-712-0 Format: Paperback Pages: 172 pages Product Dimensions: 23.5 x 18 x 1 cm