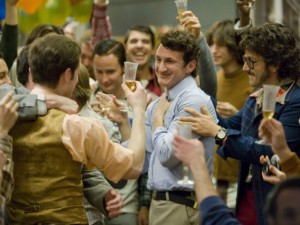 His life changed history. His courage changed lives. In 1977, Harvey Milk was elected to the San Francisco Board of Supervisors, becoming the first openly gay man to be voted into public office in America.Â  His victory was not just a victory for gay rights; he forged coalitions across the political spectrum.Â  From senior citizens to union workers, Harvey Milk changed the very nature of what it means to be a fighter for human rights and became, before his untimely death in 1978, a hero for all Americans. Academy Award® winner Sean Penn stars as Harvey Milk, with Emile Hirsch as Cleve Jones, Josh Brolin as Dan White, Diego Luna as Jack Lira, and James Franco as Scott Smith, and under the direction of Academy Award® nominee Gus Van Sant, filmed on location in San Francisco, from an original screenplay by Dustin Lance Black.
Author: Dustin Lance Black Publisher: Newmarket Press ISBN: 978-1557048271 Format: Paperback Pages: 130 pages Product Dimensions: 23.4 x 17.5 x 1.3 cm